During a conversation with a friend in Toronto: Canada this year (2018) they said “I have to have at least 3 ways to get downtown”

“What do you mean?” She was asked.

“Well I can’t rely on one way to get there. If the subway isn’t working I can use the tram. If the trams aren’t running I can use a taxi.” H stated.

“What about the buses?” I asked.

H looked at me shook her head and smiled. “I’d rather take a cab. Buses are unreliable. They come when they want. The schedule. The schedule is no help. It’s just added frustration on top of the insult of waiting…”

I had little experience of Torontonian buses apart from Go Transit to Toronto from Hamilton. Buses in London I could offer as comparison were at times unpredictable. I nodded and laughed to show I knew her frustrations.

The other comparison I made was managing anxious thoughts and low moods. What strategies do I employ when I recognise that a state of anxiety, or *pissedoffedness was imminent? What were my 3 exit routes to safety and a better state of mental well-being? Using Denial, Anger and Getting the Hell Out of here, has limited effects. The fire often still rages.

Years ago (1993) as a student at DeMontfort University, I would head to a basketball court in Victoria Park in Leicester and perfect my shot. The release of the ball at the right moment sending it sailing towards the hoop offered something towards appeasement, release and calming. This the summer after my mothers death… I knew little of the effects of grief and depression and found a way to self soothe that became a coping strategy: Basketball.

Basketball was an amazing outlet for me, many years later 1999 – 2011. Coaching gave me the chance to order a team of basketball players around on a court. Another useful way to channel energy. Coaching was a constructive activity for me and the players I coached. Coaching offered discipline, direction, focus and purpose for all. Later still summer 2005 talking therapy opened up as a way to let compressed thoughts chance to be heard and space to breathe. Sharing stories, for that is what Therapy can be, was helpful. And so began a journey I am still travelling.

The exits to better feeling that I use are:

A friend once said in order to change direction one must first stop. First notice the feelings that are stirred up. Listen for the emotions that are engaged in choosing to fight flee freeze or friend the situation. Usually there are many emotions all clamouring for the mic and anger seems to come out on top every time for me. It’s easy red energy gives chance to assert myself.

Take stock, uh oh this feels something like anxiety or anger or frustration or some other butt ugly emotion. Trailing behind it – dastardly thoughts that lead to impulses and actions that can direct one to regret guilt and shame. 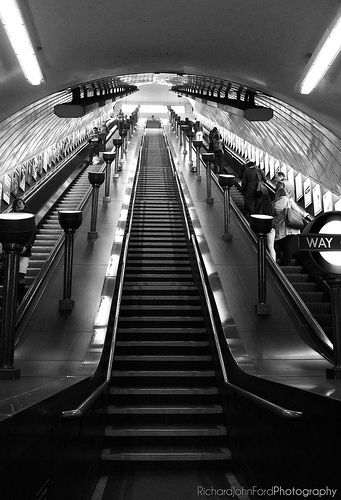 Choosing from the list of Byron Katie’s The Work I make a choice to feel better. I engage in self-soothing acts like rubbing my arms, self-hugging, rubbing my hands gently together like I do when washing hands, rubbing my  head, going for a walk either physically or imaginatively to gain peace and serenity. The aim to give oneself space and some time out. Choose to accept and honour the discomfort. This is the hard part and the best part of the work. The discomfort is showing something that needs to be acknowledged! Denying and ignoring the hurt allows it to fester and grow. Honouring allows recognition of what ails thee and a possible release and easing of the pressure. I am learning that honouring the feelings and pausing is a mighty act. It interrupts the patterns of what usually follows. Choosing rather than impulsively acting can make a huge difference. The I am getting out of here is a choice. Which direction to travel?

Reading the chimp paradox by Professor Steven Peters has helped to identify that ‘Mandeville’ my Chimp is at the root to ill feeling and malignant thought. A book recommended by Jonathan Scott several months ago as a must read. Life changing were his words of advice about the book. I wholeheartedly agree!

Another partner to the ill feeling dynamic is my inner child. Mandy the Chimp is powerful but my inner child is like Tetsuo in Akira. Apocalyptic with rage and temper. Finally binary thinking helps the justifying thought that I am right and they whoever they are, are wrong. Completing the off balance set up.

Be decisive and take action. – Gain perspective on the situation. Once clear it could be easier to make choices that best support self and or the situation. The route away from here is questioning, patient compassion. The strategies used invites my brain to move the energy away from Flight Fight Freeze Friend responses and engage with thinking.

Soothing ‘Mandy’ and the child is another important task. Once they have said all that is in them to say and have calmed right down. I can begin the questioning. Colour things in more. Invite doubt and gain answers. Here then lies truth peace and a possible way beyond the discomfort and disquiet. A solution to long held outmoded strategies that don’t get you downtown but waiting at a bus stop for a bus that’s way behind late, overcrowded when it eventually does arrive and with a driver with A WORSE mood than the one you had. Getting on to that bus possibly is not going to be the safest journey, for you, for the driver or the other tired, frustrated passengers…

Distance yourself from the situation and walk away physically/mentally with the aim to cool down. Imagine a glass of water with ripples gradually becoming still. Even better the water becoming thick with ice. Get creative with the ideas that offer solution. These arise once the noise of the confused anger has begun to calm. Listen and hear well. Generally the voice is quiet, offering advice and guidance. It rarely yells. Adrenaline is a useful energy component. It invites movement, if redirected it can be used to support mind functioning by thinking clearly and acting with purpose to solve seemingly insurmountable and threatening problems.

The next part of this bus journey is to speak to another, a friend a family member, a trusted colleague, talking activates higher functioning of the brain. The prefrontal cortex is a power house generating imaginative ideas and surprising solutions. Tapping into this part of the brain directs energy to support growth curiosity and enjoyment. Bringing a clear direction forward out of thin air where once only a wall blocked the passage. The first conversation we often have is with ourselves. The next could be with a trusted other. Mentors, Coaches, Hypnotherapists, community and faith leaders, and a host of other objective agents can help to dispel the negative and increase awareness to creative and affirming solutions. With a clear plan or decision in mind something different can be created. Generally I feel better with a solution rather than confusion.

This is the last part of the bus ride. Make a choice/decision as to what you would like to do in relation to the set of circumstances that invited disquiet.

Recently I was driving home from work and opted not to get caught in a traffic jam that would have angered me, and made getting home much later. I chose to take a side road. I went through new areas of a town I knew little of and saw landscapes and scenes that I felt lifted by. I was able to get back on route in less time than if I had sat in the jam and in a much better mood.

What detours can be made in life and what might be achieved when we take them?

I am slowly learning to accept what this saying means.

The Science of Success Podcast
https://www.successpodcast.com/show-notes/2017/6/28/the-shocking-truth-about-talent-what-it-means-for-you-with-geoff-colvin