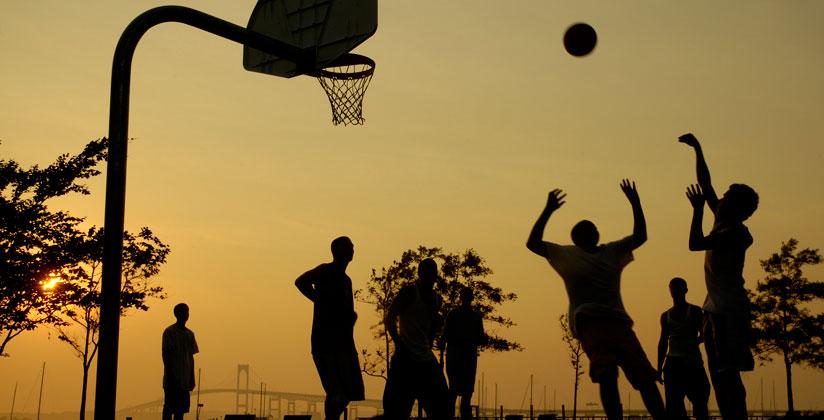 I have been a Basketball coach for 14 years and know first hand the beneficial effects basketball and playing team sports in general can have on people. While most people assume the positive effects have to do with being physically fit. As a therapist, I’m interested in the emotional benefits of playing sports as well as the obvious physical ones.

Working with boys and girls in the 11-18 age range, one of the things I observed over the years was how the sport equipped them with life skills they could apply off of the court. For example through turning up to early morning practice on time, packing a kit bag, working hard during practice and persevering with learning new skills, players acquired a range of abilities including commitment, sacrifice, organisation, accountability to one self and the team, responsibility, confidence and ultimately leadership.

As well as what happened on the court, there was often a therapeutic effect at play in the period after sessions. Many players would speak to me after sessions about some of the difficulties they were experiencing including homework, relationships, concerns with family and worrying about their future. I was often surprised by what was shared and equally what I was prepared to share about some of the challenges I experienced whilst growing up.

Both the experience of playing basketball and the informal sharing which took place afterwards enabled some players to address feelings associated with depression and anxiety. In many instances I watched players transform from people with low aspirations to people with ambition and hope about their future. I attribute their transformation in part to both the success they achieved on the court and the informal mentoring they received away from the court.

Some of the reasons I have become a counsellor stem from these conversations which sparked something in me to want to support people who were experiencing some degree of emotional/mental difficulty. Looking back on this now from the vantage point of being a trained counsellor, I’m interested in how sports develops positive relationships between players and coaches which is a fantastic starting point for therapeutic conversations.

As a learning mentor in a boys secondary school in London, Basketball again proved an effective tool to enable young men who were experiencing difficulties to talk. Talking whilst engaged in basketball allowed young men to look at some of their challenging behaviour and seek ways to adapt so as to get the best out of their school experience. Games like P.I.G. and H.O.R.S.E were great, as whilst the young men were focusing on making their shot I would be able to offer some useful insight to help their situations. Working this way helped me to establish a good working alliance with the young men that were on my case-load.

Much of what I have learnt about using basketball to support people to talk has influenced my decision to launch a walk and talk therapy service. Whether using basketball or the act of walking, both approaches involve using an activity to enable sharing and reflection. Clients often report that when walking and talking, they are surprised at how naturally the sharing occurs. To date I have observed that being in parks and open spaces invites the client to open up in the environment and begin identifying processes for change.

Recently I had a conversation with a friend about wanting to develop an idea I have of incorporating Basketball and Therapy. Given my love for the game, this seems like the obvious next step for me.

But first of all I better dust off my basketball trainers hit those courts and brush up on my skills.